You Beauty | New “Face” of Beauty: The Brazilian Facial 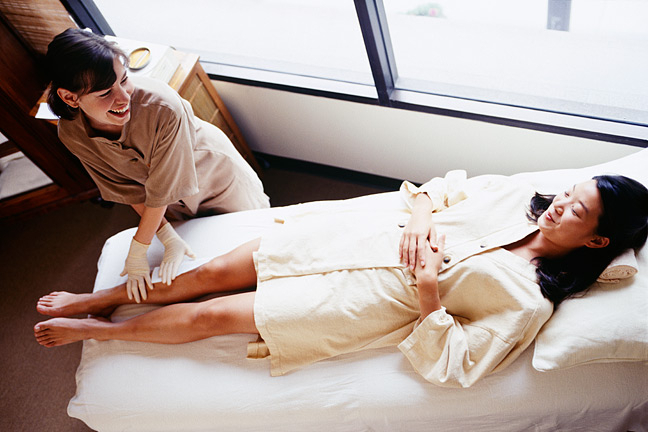 Regardless of whether or not you remove your hair down there, you may be greeted by red bumps, ingrown hairs and other unwelcome issues—which are as uncomfortable as they are uncomfortable to talk about.

So when we heard of a service that could keep your skin completely clear and soft in the most sensitive (intimate!) of areas, we had to check it out. Ladies, meet the Brazilian Facial, a skincare treatment imported from Singapore’s Strip Ministry of Waxing, that may be coming to a salon near you.

Before we decide to add yet another treatment to our list of crazy things we do to our bodies, let’s backtrack a sec and ask: Why does maintaining ourselves below-the-belt make us feel more beautiful, anyway?

Women withstand 20 uncomfortable minutes of waxing for many reasons—one, that they actually feel more comfortable in the weeks of smoothness afterward. According to a Canadian study of 16-50 year-old women, the most popular reason for taking it off: prepping a bikini-clad bod to go out in public.

Others have a drastically different reason; removing hair is a religious or cultural practice.  For example, pubic hair removal is religiously endorsed by the Muslim Sunan al-Fitra (“customs of nature”), a collection of cosmetic or hygienic practices believed to enhance, rather than detract from, one’s God-given beauty.

For non-religious reasons, removing pubic hair to feel “cleaner” and “more attractive,” as reported in the Canadian study, are surprisingly similar motives to why many women removed pubic hair thousands of years ago.

In ancient Greece, women used tweezers to pluck hair or even singed their hair off with hot coals. (Waxing doesn’t sound so bad now, does it?).

Lack of hairiness was associated with effeminacy and youth, according to historian Bella Vivante, Ph.D. and author of “Daughters of Gaia: Women in the Ancient Mediterranean World.” “Keeping them looking girl-like probably started for hygienic purposes, to keep oneself free from infestation.”

Today there’s still a notion that pubic hair removal is cleaner, though little evidence to prove it. In ancient times, this was more of an issue: Hair removal may have prevented infections arising from lice and fleas. “In Egypt it seems to be primarily for hygienic purposes,” says Dr. Vivante. “Egyptian women plucked using tweezers, and razors have been found in women’s graves.” Some historians even trace the hair removal “sugaring” technique back to the Ancient Egyptians.

Fast forward to today, and hair removal may actually cause more problems if you’re not careful. In some cases, shaving can cause inflammation of the hair follicles (folliculitis) that leads to rashes, itching and pimples or pustules in the infected area. It ain’t pretty, and can lead to a more serious infection if untreated. Even if you don’t remove hair, you can experience some of the same skin problems you have with your face. This is where the Brazilian Facial comes in…

I arrived for my Brazilian Facial, at the industrial-chic Strip Ministry of Waxing in New York City, highly skeptical. The name alone sounds like a mandate for hairlessness. But I learned a few surprising things. Firstly, the facial doesn’t require that you have a Brazilian bikini wax—they’ll administer the facial to all varieties of pubic hair fashion. Regardless, I received the “Wax and Polish” works, which included a Strawberry wax with chamomile and aloe vera that hardens before being removed, touted to be a bit less painful than soft wax.

While gripping my strawberry squeeze toy, I asked the aesthetician, “do guys ever do this?” To which she answered, absolutely: The Boyzilian. So if you’re enraged by the double standard of hair removal, or if the man in your life comments about your hair situation, you can enlighten him with his hair grooming options.

After the deed was done, the aesthetician started the “facial” using a handheld device, which is similar to the concept of microdermabrasian. But instead of using a stream of particles to perform the exfoliation, she used a diamond tipped applicator that acts as a physical exfoliant. It was painless and felt like light sandpaper. I had a 2-percent salicylic acid cleanser (one of three available cleanses) while a “wand” gently suctioned, which helped open pores so they don’t clog up with oil or stubbornly-trapped hairs. It could also treat acne and blackheads.

I’ll spare the details and just say that at the end of my cleanse, I was completely clear. Things down there felt better than ever.

If your concern is hyperpigmentation or age spots, you could opt for a lightening treatment. The Light solution uses peptides to slow the production of melanin and brighten skin. It’s said to treat melasma and photo damage without causing redness or itchiness. Instead of hydroquinone, it uses arbutin and mulberry as brightening agents, which are plant-derived extracts.

Dry skin is a common issue for women coming in for the treatment, which I was surprised to hear. The aesthetician has done quite a few hydrating treatments, using hyaluronic acid to moisturize, and calming chamomile to help with sensitivity.

You may be familiar with similar services for, you know, your face?

If you’re not getting professionally primped, you can try moisturizing and maintaining the area on your own. Salons like New York City’s Shobha offer natural lotions and exfoliating products specifically designed for your bikini area. Kelly Burns, aesthetician and owner of Your Face and Place has been sugaring for 11 years and sees ingrown hairs as the number one problem for women. “Use products with salicylic acid or glycolic acid solution to help remove dead skin cells so the hair can come through,” she says.Unfortunately, if you’re ingrown-hair prone, you might not be able to control your destiny.

YouBeauty Dermatology Advisor Amy Wechsler, M.D. explains that the hair can curl before it reaches the surface, which ends up creating the bump before you have a chance to treat it. To avoid ingrown hairs and inflamed hair follicles, Dr. Wechsler’s treatment of choice is laser hair removal. Brazilian Facials can be performed immediately after an intense pulsed light (IPL) treatment at Strip.Hesitant as I am to take the step toward some more permanent hair removal (I like to remember I’m a ‘natural woman’), experts do agree it could prevent nearly all said hairy issues above.