Truth In Aging | Sugaring Hair Removal Treatment: Not As Sweet As It Sounds 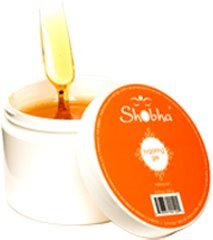 My most recent bikini waxing appointment was both painfully long and exceedingly painful. The particular salon that I picked specializes in an all-natural, low-temperature wax that is supposedly favored in Europe. I was intrigued by the benefits of this particular wax for sensitive skin (no burning or irritation) but was unaware of the hour-plus procedure that would be involved (with the esthetician going over each section of skin repeatedly). Maybe that’s acceptable in countries where life moves at a leisurely pace and women are more comfortable with public nudity. But I prefer my waxing appointments short and sweet. And dragging out the excruciating process even a minute longer than absolutely necessary is a deal-breaker in my book.

While on the lookout for a new method of hair removal, I came across sugaring. Unlike waxing, which sticks to any surface where it is applied, sugaring does not adhere to living skin cells and rip them off the body. The sugaring technique minimizes pain by pulling hair in the natural direction of growth, whereas waxing has a high ouch factor in going against the grain. Since wax hardens on the hair, it has the tendency to break it off at the surface, leaving 15-30% breakage behind. Also at odds with wax, sugaring paste is water-soluble and can be easily rinsed off skin or clothes. Though the wax treatment that I most recently tried was composed of all-natural ingredients, most products used for body waxing are made from petroleum-based resins, artificial fragrances, dyes, preservatives, and other potentially allergenic chemicals.

So, what exactly is sugaring? A technique that was established many centuries ago in Egypt, sugaring is quite possibly the oldest and most natural form of hair removal. Today, there are two basic types of sugaring: a paste and a gel. In true sugaring, the paste or gel is made up of only three ingredients: sugar, water, and lemon. I use the term “true” because some salons fool customers with a cheap imitation of the organic sugaring mixture. The service will often be marketed as “sugar waxing” and will incorporate a wax resin product mixed with sugar. A counterfeit can be identified by its reaction to water. Any wax-containing product that is applied to the skin will remain sticky when rinsed with water alone, whereas a true sugaring product will wash right off.

Besides being prepared with ingredients that could produce a delicious dessert, the benefits of sugaring extend beyond its pure formula. During application, the sugar paste or gel seeps into the hair follicle, lubricating the hair root for easier removal. Pulling hair out in the same direction of growth lessens strain on the skin and prevents breakage of the hair follicle above or below the skin’s surface. As a result, ingrown hairs don’t form and the surface stays hairless for as long as possible. Over time, when the hairs grow back, they become finer and softer. The skin also gets a bonus smoothing treatment.

Sounds almost too good to be true, right? Why would anyone ever bother with the short-lived effects of shaving, labor-intensive tweezing, tear-inducing waxing, or high-priced lasers? I thought I had stumbled upon the holy grail of hair removal. As a first-timer, I figured my legs were the safest and least sensitive area to test out a foreign method. So – to the dismay of my fiance – I went without shaving for two full weeks to grow out my leg hair to the requisite length (1/16” for sugaring paste and ¼” for sugaring gel). With my cactus-like skin ready, all I needed to do was decide whether to book an appointment for a sugaring procedure at a salon, buy an at-home sugaring kit, or concoct my own mixture and take care of business myself.

I quickly learned that it isn’t easy to locate a salon offering sugaring services, which require trained practitioners and more time than the average waxing job. Depending on the body part, in-salon sugaring services run from $25 to $95. A full leg treatment typically falls in the range of $50 to $95, which is $50 to $95 more than I spend when I shave. Considering that hair-free results only last roughly two weeks, my cost-benefit analysis did not work out in the salon option’s favor.

At-home hair removal systems are decidedly more economical. The most popular sets, such as Shobha Sugaring Kit for Body and Bikini ($30) and Parissa Chamomile Body Sugar ($12), come with talcum powder, a microwaveable jar of sugaring solution, and reusable fabric strips. But when I read up on the ingredients in the solution and the equipment needed to perform the sugaring treatment, I realized that I had everything I needed already. Recipes and instructions for DIY sugaring are all over the internet. I figured that even I – with my limited supply of kitchen tools and limited patience for DIY projects – could handle it.

To whip up a homemade sugaring solution, all you really need is sugar and a lemon (or lemon concentrate). Combine 2 cups white sugar, ¼ cup lemon juice, and ¼ cup water in a sauce pan over medium-high heat and stir while the mixture comes to a boil. Then, turn the heat down to low-medium and allow the solution to simmer for about 25 minutes until it turns a dark shade of amber. It is critical to allow the solution to reach this dark color because if it doesn’t cook long enough, the consistency won’t be pliable enough for sugaring to work. After the sugaring solution has cooled off, pour it into an airtight container to prevent contamination.

I decided to first try the sugaring paste method, which doesn’t require any additional equipment beyond baby powder to prep the skin. I allowed the solution to sit for a few hours until it cooled to room temperature and hardened to a thick, moldable paste. Tipping the container to the side should make the mixture flow very slowly like molasses. If the consistency is more honey-like, then it didn’t cook long enough. Before putting the sugaring paste anywhere near my skin, I scrubbed and exfoliated my legs in the shower and then applied a layer of baby powder to my first test subject: my shin.

Now, for the moment of truth. I stuck my fingers into the mixture and scooped out a sticky blob. Unfortunately I didn’t have latex gloves, which are recommended to cut down on mess. The next step was to roll the syrupy blob into a ball between my palms. I then pressed the ball of sugaring paste onto my shin and spread it in the opposite direction of hair growth. After being warmed by the spreading motion, a good amount of the solution clung to my fingers so I rinsed it off in the sink. Then, I pressed down on one end of the sugaring smear with one hand, held my skin taut with the other hand, and quickly pulled upward in the same direction of hair growth.

Instead of pulling out the hairs in one clean flick of the paste, the skin lifted a little and the sugaring solution did not budge. After being warmed by my hand, the sticky paste clung to my palm. I tried the flicking motion at least ten more times before giving up on the paste method. My entire shin was coated in a layer of syrup and my hands were glistening with a gooey mess. Yet, I rinsed off and soldiered on with the sugaring gel technique, which is said to be easier for amateurs.

Performing the sugaring process with the gel method starts by warming the mixture in the microwave for about 30-60 seconds to liquefy it. I don’t own those wooden applicators that the professionals use, so I stirred the mixture with a butter knife and tested the temperature with my finger. This time I prepped my calf skin with baby powder. Using the butter knife, I then smeared a healthy dose of the syrup on my leg. I laid a thin rag (shredded cotton shirt) over the gel, patted it a few times, and yanked the cloth upward in the opposite direction of hair growth. What happened next can be described in a nutshell as all pain, no gain.

Unlike my results with the sugaring paste, the gel method actually removed some of the sugaring solution from my leg,  along with a few hairs. But in the meantime, it stung the surface of my skin and left the bulk of my leg hair behind. I have a fairly high threshold for pain, so I repeated the process with five more rags until my entire calf had been coated with the syrup and irritated beyond belief. In spite of the throbbing pain, I might have been satisfied with my experiment if my calf emerged smooth and hairless. Rather, it was left with awkward patches of hair and covered in red bumps. The rash did not subside until 24 hours later.

What I learned from this trial and error is that sugaring is best left to the pros, whether in the form of an at-home kit or a salon visit. Many sugaring solutions marketed for home use contain ingredients such as citric acid and Arabic gum, which tighten the skin and improve the consistency of the paste. Some are even enhanced with vitamins and essential oils to nourish the skin post-treatment. In my humble opinion, the basic recipe for DIY sugaring is flawed. After following the instructions to a T, I accomplished no more than a few bare patches of leg hair and tender, raw skin. Clearly, the sugaring technique is not as simple or effective as it sounds.

Have you ever tried a professional sugaring treatment or packaged kit?