Total Beauty | Peach Fuzz Is a Thing When You’re Over 40. Here’s How to Get Rid of It 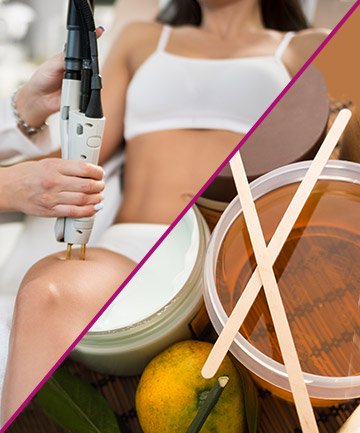 Let’s not sugar-coat things: Dealing with facial hair can be a real pain in the you-know-what, especially when it comes to peach fuzz, AKA the annoyingly fine hair that covers your cheeks, forehead and even ears. “This isn’t the same type of the hair that we have on our head, arms, legs, bikini line or underarms,” explains Shobha Tummala, founder & CEO of Shobha. “It’s vellus hair, which means it’s short, thin and light-colored.” While this soft fuzz may not be as noticeable as coarse, dark strands, it can still be unsightly and understandably something you’d prefer not to have on your face. But because it’s a different beast than all the other hair you’re used to removing, getting rid of peach fuzz requires extra consideration and some different techniques.

Just say no to lasers — at least for peach fuzz-removing purposes. Lasers work when the melanin, AKA pigment, in the hair absorbs the energy and damages the follicle so that the hair doesn’t grow back. Since vellus hairs don’t have any pigment, there’s nothing to absorb the energy from the laser and damage the follicle, Tummala points out. Save zapping for other parts of your body.

Here’s another hard pass. While this method is permanent, which may seem appealing, it’s no bueno for facial hair. Electrolysis uses an electric current to destroy each hair follicle, but won’t work on super fine hairs, like, you guessed it, the ones on your face.

In theory, yes, wax will work, but be careful. As a general rule, waxing tends to be a rougher method of hair removal, cautions Tummala; there’s not only the risk of ripping your skin, but also potential for burns. If it’s your tried-and-true jam, go for it, but it’s also not a bad idea to save it for the skin below your chin.

Often lumped in with waxing, the two techniques are very different. “Sugaring resembles waxing in terms of the process, but the sugaring gel is made by melting sugar, water and lemon juice to create a honey-like consistency. It’s sticky enough to remove the hair, but not as sticky as wax where it’s also removing the top layers of your skin,” explains Tummala. This makes it both less painful, and less likely to cause redness or irritation, always a good thing when dealing with your complexion. The one potential drawback: Because it isn’t super sticky, it may take more than one pass to completely de-fuzz an area.

Again, this is another case where they’ll work, but user beware. “Depilatories contain chemicals to essentially dissolve the proteins of the hair, making it weak enough to be broken off when the cream is wiped away,” explains Tummala of the process. It’s effective, but read the directions carefully and follow them to the letter (seriously, this is not the time for creative license). Also important: Be sure to use a formula especially made for facial hair, like Sally Hansen Brush-On Hair Remover for Face, $6.99. And if your skin veers towards sensitive or is easily irritated, you may want to try one of these other methods.

Tummala says this is the gentlest form of hair removal for the face and neck, and super effective because it removes the hairs at the root. Still, there are some drawbacks. Some people can develop little bumps immediately afterwards, and you’ll want to steer clear of strong skin-care ingredients (think: glycolic acid) for 24-48 hours post-threading. If you’re a DIY kind of girl, there are at-home tools that mimic the effects. The Finishing Touch Flawless, $19.99, looks like a tiny lipstick tube and spins to sweep away hairs; the Tweezerman Smooth Finish Facial Hair Remover, $20, is a tiny tool that removes hairs with a metal coil as you twist the handles

It’s not just for men; Tummala points out that shaving is another viable option for removing peach fuzz. (And no, contrary to popular belief, it won’t make hair grow back coarser or darker, we asked.) You can go the old school razor plus shaving cream route, or try a battery-operated trimmer like the Clio Beautytrim Personal Hair Trimmer, $9. Just keep in mind that it will require regular upkeep to maintain smooth skin.

Think of this as shaving on steroids. Rather than a standard razor blade, a scalpel (don’t freak, it’s not as intense as it sounds) removes both vellus hairs and dead cells on the top layer of the skin. This makes it an effective method of not only hair removal, but exfoliation, too, and the only one of the bunch that will leave you with both hairless and glowy skin. It’s smart for first-timers to leave this up to the pros and see an aesthetican, though there are at-home devices available, too. Both Dermaflash, $189, and Michael Todd Sonicsmooth Sonic Dermaplaning System, $99, combine the benefits of dermaplaning with sonic vibrations to both exfoliate and de-fuzz. Dermaplaning is a good option for most people, though if you have acne, conditions like rosacea or eczema, or your skin is super sensitive, skip it.