The Washington Post | Did you catch those Peeps on ‘Odd Mom Out’? They’ve got a Washington backstory. 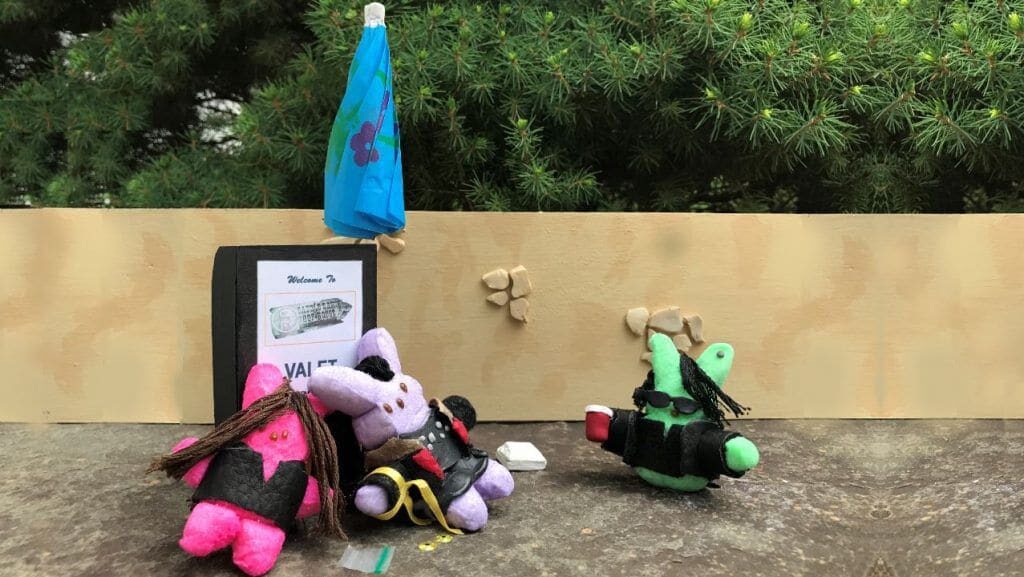 During last night’s season finale of “Odd Mom Out,” a satirical sendup of Upper East Side momming, the show’s creator and star Jill Kargman declares a coffee-table book of Peeps dioramas “the most me thing I’ve ever done.” But that’s not quite right.

The dioramas featured heavily in the episode “Blood Bath” were in fact the work of Washington PR maven Barbara Martin, co-principal of the communications firm BrandLinkDC — and local Peeps buff.

Here’s how Martin, who has entered (and lost) the now defunct Washington Post Peeps Contest twice finally got the respect she deserves (emphasis ours).

Martin caught the diorama bug almost two decades ago while working at a publishing house that specialized in crafts. After moving to the District and learning about The Washington Post’s contest, she made a promise to herself that one day, someday she’d just go for it. Finally five years ago Martin spent weeks on a teeny tiny marshmallow ode to Drybar, one of her clients. But that dream was deferred.

“I didn’t win, which is total highway robbery,” joked Martin, who has since created the sugary dioramas for several of her high-end clients. There’s a partially edible tableau for salad shop Sweet Green, sweat experts SoulCycle and the hair removal salon Shobha. In that last one, set in a spa room, a Pink Bunny Peep has just “waxed” the, ah, lower region of a Blue Bunny Peep. It was her good pal Kargman’s favorite.

“Jill just thought they were hilarious and kept saying, ‘I have to put them on the show,’ and I’m like, ‘Yeah yeah yeah.’” The two friends went back and forth like that for years.

Hours before the Season 3 finale, Kargman wrote in an email that she “HAD TO find a way to use them on the show.” Martin agreed to forward Bravo all the images she had of her own work but had no idea how the network planned to sprinkle the Easter treats into the show’s plot until she watched the finale with friends last night.

In the first five minutes, Kargman’s character, Jill, a mom of three who’s diving back into her career as a photographer, decides to pitch a coffee-table book of “those Peeps dioramas I used to make.” She describes them as a fun house mirror held up to her life, showing just how ridiculous it can be. Later she goes even deeper: “I’m employing a symbol of the everyman to comment on the lifestyle of today’s rich.”

For Martin, it might be a tad more simple.

“I’ve always been crafty and I love sugar,” she explained, before adding that she’s also “a little OCD.”

Case in point: Martin built a miniature hardwood floor for that SoulCycle diorama, another Peeps contest entrant. “It was obnoxious,” she admitted. But also very worth it, despite losing the contest for a second time (also “highway robbery”). Michelle Obama’s staff actually showed the first lady a photo herself as a Peep (Mrs. O is a regular). “I heard that she loved it,” said Martin.

“I need a place to be really ridiculously creative and this is it,” said Martin, who spends anywhere from two months to three hours constructing her marshmallow masterpieces depending on the moving parts (the SoulCycle diorama required 25 Lilliputian bikes and the same amount of black suits). “It’s awesome in every regard.”

The price for all this awesome? It ranges between a few hundred to just a few dollars. Almost all the work is done by Martin herself (she won’t let her kids or husband get within arm’s length) during the wee hours of the morning in her Bethesda kitchen. “Who else is going to do this?” she asked. “It’s just too weird.”

But not too weird for Bravo.

Before watching last night’s “Odd Mom Out” finale, Martin joked that she “might just retire.” We doubt that though. The coffee-table book deal? Jill landed it in the final seconds of the finale. That probably means more hours of Martin “laughing maniacally” to herself while tinkering with her tiny Peeps.