The Fashion Spot | Boys Will Be Babies: Man Gets Waxed and Lives to Tell the Tale 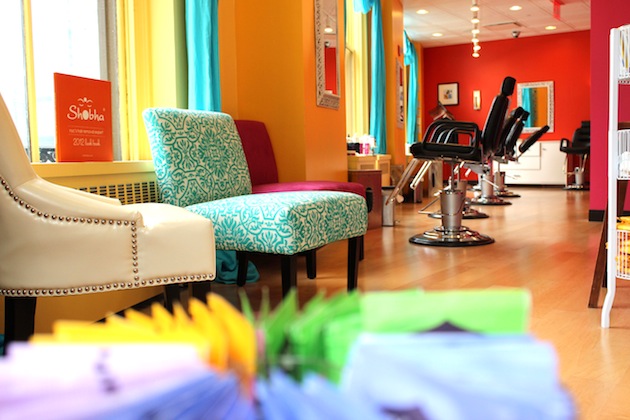 Looking for a way to mitigate the pain of a bikini wax? I have a solution – entice a male friend into tagging along with you and have him lay through a back wax while you’re getting your below-the-belt region tended to. I did just that a few weeks ago and I can, without a doubt, assert it was the most hilariously painless waxing session I’ve ever experienced.

After my friend – let’s call him Isaac – confided that his only flaw was a hairy back (cough cough…), I told him that was something that could easily be fixed. Next thing you know, we’re off to Shobha for his and hers waxes. My go-to, Shobha is quick and efficient (many of their waxers have been with the mini hair removal chain for years), and they’re as clean and posh as competitors like Completely Bare and Bliss, but less expensive. I usually don’t hear much of anything when I’m getting waxed and despite years of subjecting myself to the pain, I have yet to get used to it; however, with Isaac in the room next to me pleading, “Can we please take a 20 second break?” (yes, the pleas were so loud that I could hear them through the walls…), how could I do anything but laugh?

Among the other things I heard was, “What percentage of done are we?” along with lots of painful sighs and groans. This may or may not be sadistic, but the best part of the whole experience was post wax when Isaac was told that his hair would start growing back in about 1.5 to 2 weeks – the look of horror on his face was priceless. He later told me that even if it would last longer, all he could think about while being covered in hot wax – while his legs flailed in the air – was that he would never subject himself to a wax again.

Of course, I couldn’t let the opportunity to probe my male friend about his thoughts on female body hair pass me by and I was pleasantly surprised that he remarked, “Women are expected to live up to strict beauty standards, it’s only fair that men take care of themselves too.” Isaac further confided that most of the guys he knows do some sort of self grooming whether it be their armpit hair, eyebrows, below-the-belt-region, or shaving their own chest and back (which he has done – “it takes me over an hour!”). More interestingly, at the urging of a girl – “The first girl I ever had sex with if you must know…” – he had his chest waxed when he was a teenager. The girl was delighted, Isaac’s father was appalled and told him that “real men don’t wax their chest,” which brings up a very interesting generational divide. While the Baby Boomer generation may scoff, male waxing is so accepted today that Isaac said he would have no problem admitting that he had it done (though he draws the line at my recounting the process in detail on The Fashion Spot with his name attached).

As for what he likes to see with girls he’s interested in when it comes to hair, nothing. “I’m so hairy, I don’t want to see any of it on a girl I’m dating. I once was having sex with a girl and she had a hair on her nipple! I couldn’t concentrate. Why didn’t she just tweeze it? Also mustaches are a problem.” He also told me that while it’s unlikely that a guy would ever tell a girl, for the most part, guys are not into hairy arms: “Basically, when most guys see hairiness, their penis runs.”

Given his experience with a chest wax, albeit a decade ago, Isaac admitted to being very surprised at the level of pain and noted that while the infamous 40 Year Old Virgin scene was overacted, the pain it captured was accurate. (“I’m surprised I wasn’t screaming!” — little did he know…)

So, while Isaac may or may not be back for a second go-around, he maintains that “the vagina is a beautiful thing, why cover it with hair?” Let’s hope for Isaac’s sake, his next girlfriend doesn’t feel the same way about men.