Racked | What It’s Really Like to Get Laser Hair Removal 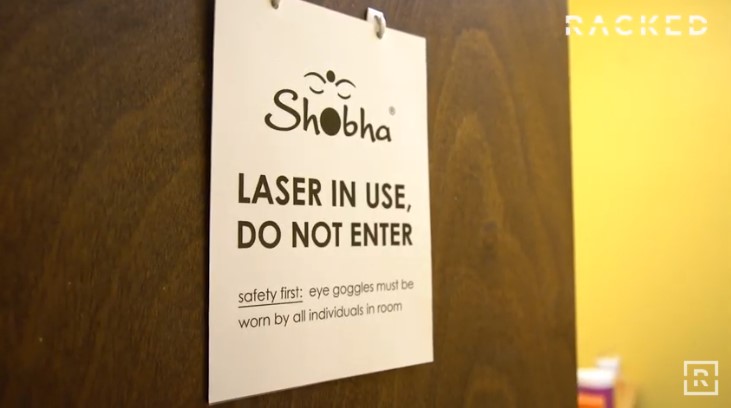 Every weekend I spend about 45 minutes and $30 (plus tip) at a tiny, family-owned-and-operated threading spot in the Bushwick neighborhood of Brooklyn. My eyebrows are naturally big and bushy, so they get touched up every other week, but my upper lip, chin, and neck? Getting those parts of my face threaded has been a weekly affair for the last four years. (Some quick math: That’s nearly $1,500 a year.)

This tedious grooming has felt like revenge for literally shaving my entire face as a tween when my mom warned me not to (I was upset that being Portuguese and Venezuelan meant dark peach fuzz). It’s been getting old — and expensive. And more than anything, it just still really hurts no matter how many times I’ve gone.

So when I got an email from a laser hair removal expert a few weeks ago about trying a complimentary service, I was immediately interested. But just as fast as I knew I wanted it (read: needed it), I also realized I knew almost nothing about the process.

To get some intel, I spoke with Shobha Tummala, the founder and CEO of the Shobha salons in New York City, who explained the process and filled me in on everything I needed to know before deciding if laser hair removal was right for me. Here’s what I learned — and what it felt like when I went under the laser myself.

What laser hair removal actually is

During the procedure, lasers shoot concentrated beams of light into each hair follicle. The hair follicle pigment absorbs the light, which destroys the hair from the root. But it doesn’t actually remove all your hair. “Legally, technicians are required to say it’s called permanent hair reduction,” says Tummala. “Every square inch [of our bodies] has up to about 300 follicles. A lot of them are dormant, but some of them are active, which is the hair that we have on our bodies. The laser targets those hair follicles that are active.”

How many sessions you actually need — and how much it costs

A lot of variables go into deciding how may sessions you’ll need (skin type, what part of your body you’re removing hair from), but on average, the most effective results come from eight to 12 sessions. In between each one, you’ll have to wait four to five weeks to let new hairs grow in.

Cost varies depending on where you are. Sessions at Shobha’s New York City locations start at $39 for one upper lip session and go up to $1,200 for full body; the service I had on my neck would normally cost $99. But luckily, they offer package deals. For me to end up totally hair-free on my neck, I’d need to buy two packages of six sessions at $82 each, or $984 total. For my chin, I’d do the same at $48 each, or $576 total. (It’s a lot less expensive than I’d imagined it would be.)

How the procedure goes down (and how much it hurts)

First, my technician applied sonogram gel on my neck to help keep the skin cool throughout the process. Goggles (like the ones you’d wear to go tanning) were placed over my eyes to protect them from the laser. Next, cold air was brushed onto my skin to further cool it down and minimize pain.

The actual lasering lasted less than two minutes and felt sort of like teeny rubber bands snapping on my neck. I could smell some of my hairs burning, which was kind of gross, but also kind of cool. A cold compress was used immediately after to close up my pores. Pain-wise, on a scale of 1 to 10, it was a low 3. Compared to getting each individual hair threaded off my neck? No contest — I’d rather get lasered any day.

What you should expect from the results

After your final session, you can expect the area to be totally smooth, with a small number of super-fine hairs popping up after a few years. “The goal is that all of your active hair, after whatever number of sessions you need, has been eliminated,” Tummala says. She notes that a touch-up once every few years is common, but that it saves you a lot of time and money in the long run.

And as someone who has spent a lot of time and money on threading, I certainly agree. While my initial session with Shobha was complimentary, I’ll be paying for my forthcoming sessions out of pocket — and it couldn’t be more worth it.