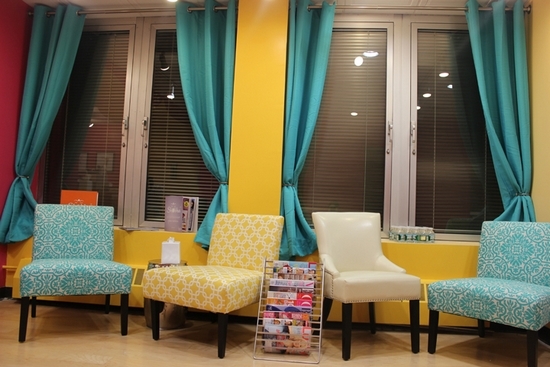 Shobha Salon has opened a new outpost in the Financial District

Why are so many downtown women – and men – paying $33 to have their eyebrows threaded and $60 for a bikini wax?

Because Shobha clients are always serviced by specialists who’ve been trained in the art of eyebrows, bikini waxes, and all other things hair removal. Loyal customers feel that a “sure thing” is worth paying for, and it’s why you may want to fork over the extra cash this Memorial Day weekend, too.

Shobha Tummala, 40, has mastered the art of hair removal and operates one of the most esteemed threading and waxing salons in New York. From a single chair at Sam Wong’s Salon in Soho came four salons located at Madison Avenue (41 East 57th Street), Soho (594 Broadway), and Columbus Circle (1790 Broadway), with its newest location nestling into the Financial District at 65 Broadway. Their specialists undergo hours upon hours of training, they use a special kind of wax, the staff is friendly and professional, and everybody leaves happy.

“It’s a better experience than I’ve had anywhere else, and they just do a better job,” said Heather Olexa, 32, a hairdresser by trade and an eight-year Shobha client. “The results also last longer.”

Olexa was thrilled when the salon opened a downtown location last September, since she used to have to wait for her day off to make a special trip uptown.

“There’s nothing like it down here,” she said, referencing her Financial District neighborhood. “Other salons here aren’t as clean and, from what I’ve experienced, they don’t train their workers the same way.”

A $22 threading with a “level 1” stylist is a soothing experience full of music and rosewater towels. The stylist will show you what she plans to do, and you’ll feel the precision of each hair being lifted, artfully. After, a cold compress is applied to soothe redness. Threading with a senior stylist is the same experience, but for $33. According to Shobha, you’re not sacrificing quality if you opt for a level 1, since all of Shobha’s employees are held to a high standard.

“Each of our specialists must undergo 100+ hours of training when they join our team, regardless of the experience they have had prior,” Shobha said. “Our senior (level 2) specialists’ elite clientele include A-list celebrities, professional models, makeup artists and beauty editors.”

Some clients, like Olexa, always book their appointment with a senior stylist. “If I’m gonna spend that much money, I might as well do it with someone who’s been there longer,” she explained. “It’s also a time thing. The more experience they have the faster it is, so I’m out of there quicker.”

The salon is also happy to help when you’re trying to grow your brows out.

“Clients call and email all the time with questions,” explained Jennifer Pesce, head of communications for the salon. “We help take care of you in the interim.”

Lena Gifford, 35, who also lives downtown, said she booked her first visit at their Soho location after reading the reviews on Yelp. “They had the best out of everyone,” she explains of her decision, adding that she goes every three weeks because she’s a “hairy beast.”

“The front desk people are kind and intelligent, and they actually follow the ‘no-double-dip’ rule. Other nail places usually don’t, even though it’s the law,” Gifford said. “Shobha has the bikini wax down to a science. It’s a simple technique, front to back. You assume the position, and you’re done. It’s not weird.”

Here’s the unique thing about Shobha’s special brand of wax: you can eat it. It’s called “sugaring” and the “wax” is all-natural, made from sugar, water, glycerin, and lemon juice, which is gentler on your bikini line.

“We also try not to put you in a lot of positions,” said Pesce. “At some salons, you’ll be in the wax room for an hour, and they’ll put you in all different poses, but that means they don’t know what they’re doing. You should be in three positions, tops, and it should never take longer than 15 minutes.”

The Financial District location has also been seeing an increasing number of Wall Street mean waxing their “bikini areas,” too.

“If men are going to shave, they might as well just wax, or they’re going to have two 5 o’clock shadows,” Pesce said. “Plus, you get the optical illusion of an extra inch, and it will grow back in softer instead of sharp, like when you shave.”

She added that happy workers are productive workers, and that Shobha does her best to make sure the staff is content.

“It’s not a total sweatshop like other salons in New York,” said Pesce. “We give our employees 401K and paid sick days.”

Shobha is also involved in charity work, recently taking partial ownership of an orphanage in Hyderabad, India, which cares for 70 children and makes sure they attend school. She also regularly contributes to School on Wheels, an organization that converts old buses into mobile classrooms in Mumbai and Pune for children on the streets, offering them an alternative to begging and teaching them that education is their way out of poverty.