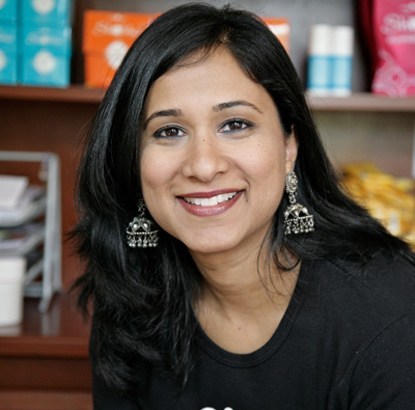 Shobha Tummala began her training in beauty products as early as a child in Hyderabad, India under the care of her grandparents. Born in Michigan, CEO and founder of Shobha, specializing in effective hair removal services and products, had her grandparents injecting natural rituals in to her daily life from the start. Her grandfather, a horticulturist, known to many farmers as the “plant doctor,” would take her on his travels to visit the different gardens throughout India.  Tummala’s grandmother immersed her in India’s natural & spiritual beauty culture.

“My grandmother made all of my beauty products herself,” said Tummala. “Hair conditioner was created from crushed hibiscus petals picked from a tree in our backyard; soap from a mixture of shaved sandalwood & lentils; moisturizer was just the cream from fresh milk.”

As years went by, Tummala says she would spend her summers in India and it wasn’t unusual for her grandmother to scold her for not maintaining the traditional personal care she was taught.

“My grandmother could tell if I had been using store-bought products from the color & texture of my skin & hair- it was unbelievable!” said Tummala. She also experienced the benefits of threading, the customary way to remove facial hair in India.  It was the painless efficiency & precise definition that threading afforded made Shobha swear off wax, until she returned to the US and found there was no one in her area that threaded.  Thus, the idea of Shobha was inspired!

In 2001, Tummala set out to create a salon that catered to people like her, who see hair removal as a necessity in life.  She wanted a place where hair removal was the main focus instead of just some add-on, haphazard service in the back room of a nail salon.  She wanted to create a friendly and inviting relationship with clients so they would not feel embarrassed about their hair removal needs; a place that stressed cleanliness & sanitary practices, like no double-dipping, so they didn’t have to worry; a place that cared as much about quality & customer experience as she did, instead of the usual establishments where the technicians made it seem like they were doing her a favor.

Today Tummala owns & operates three Shobha® Locations in Manhattan, specializing in sanitary hair removal methods including threading, sugaring & waxing.  Shobha and her team have also begun a product line which is receiving great acclaim. Masalamommas had the chance to catch up with Tummala to talk to her about how she has juggled the challenges of being a successful entrepreneur.

How did you get into this line of business and what were some of your biggest challenges?

My path till when I decided to veer off probably looks very similar to most of you reading this.  I got a degree in Electrical Engineering and worked for Procter and Gamble for a couple of years before venturing off to Harvard Business School.  I got my MBA and was only 23 years old and too green to decide what I wanted to do with the rest of my life.  So, after business school I went to what I consider post business school training and worked for Bain and Company as a management consultant.  This is where I learned about how the industry you work in doesn’t matter.  You can master any industry if you study it enough.  After Bain, I worked at a start-up called Dash.com.  The typical internet start-up experience in the late 90’s ended up being the best thing that could have happened to me.  I became the process guru in the company.  I loved it. I loved the whole concept of going after an idea.  I loved getting stuff done and building processes to get the company to grow and expand.  I couldn’t turn back and go work in a 9-5 job anymore.  I had been bitten by the entrepreneurial bug.  Out of that, Shobha the company was born!

What were some of the biggest challenges?

For example, we were in India getting married and the day after I was out shopping for herbs to experiment with when we get back.  In my defense, these herbs can only be found in India. In Goa,we got amazing facials and so I went to go talk to the manager about what herbs they use and how they manufacture their products.  You get the idea.

You have to learn how to toot your own horn.  You have to put yourself out there and it is hard for a lot of us to do. I think this fear is sometimes what assuages people from not doing their own thing.  You will be selling this to landlords that are renting you space when you have no revenues, you will be selling this to potential employees about how it is going to be a great company before there is one, you will be selling you idea to vendors, manufacturers that want to work with big players versus investing lots of time in someone that is going to buy 500 units of something. They are looking for the 100,000 unit order.

We are all used to being affiliated to big universities, big corporations, powerful institutions, that when we call on their behalf, we are used to people listening and taking the phone call.  That is going to change dramatically when you start your own business.  You have to be ok with finding validation for yourself with your own company even when it first starts.