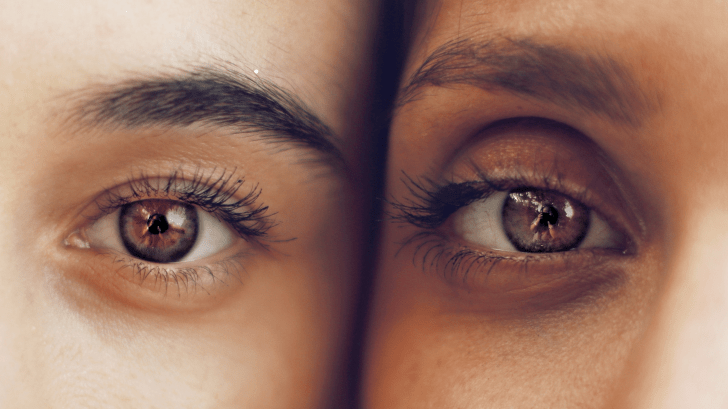 When the movie Mirror, Mirror premiered in 2012, Lily Collins’ bold eyebrows were far from mainstream. Fast forward five years to now, and her brows are—knowingly or unknowingly—being emulated by almost everyone.

Thanks to the influence of Collins and others, including model Cara Delevingne, thick eyebrows have become a beauty ideal. Much like contouring, creating bold eyebrow shapes is now seen as an essential part of sophisticated beauty routines. Thick brows—and the products needed to create and maintain them—can be found nearly everywhere.

The obsession with eyebrow shapes has even saturated pop culture. “Eyebrows on fleek” has been ubiquitous since 2014, when teenager Peaches Monroee used the term in a Vine. In the UK, overly thick, dark, artificial-looking brows are often called “scouse brows”—a reference to an episode of the British TV show Desperate Scousewives.

Eyebrow trends, including fun, brightly-colored eyebrows and parodical “squiggle brows,” had their heyday in 2017. The brow trend has even involved its fair share of controversy, with many people pointing out that women of color were shamed for having thick brows until white influencers made them trendy.

While eyebrows have gotten bigger over the past few years, they’ve always been an important part of the face: we just didn’t realize it until recently. A 2002 study, for example, shows that eyebrows play a huge role in facial recognition. Eyebrows also contribute greatly to our recognition of emotion in facial expressions.

Different eyebrow trends have punctuated Western beauty ideals over the decades. In the ‘20s and ‘30s, pencil-thin, curved brows were popular. These were ditched for fuller, thicker brows in the ‘50s and ‘60s, which were replaced by more natural-looking brows in the ‘70s and ‘80s. The ‘90s saw women opting for thinner eyebrow shapes, while the early augts saw brows thicken again.

So why have bold, perfectly-groomed brows suddenly become so popular?

In part, it’s because of the influence of social media. “Brows have been become the focal point of beauty trends in recent years due to the new wave of social media marketing and the ongoing evolution of brow products,” says Shobha Tummala, founder of Shobha hair removal salons. “With the growth of visually-driven social networks such as Snapchat, Instagram, YouTube, Tumblr, etc., people are now able to be in touch with beauty trends all over the world at the palm of their hands,” she says.

Selfie culture means it’s easier than ever to see numerous close-ups of celebrities and influencers every day, and there’s no doubt that we’re strongly influenced by the picture-perfect, impeccably groomed eyebrows of our influencers. This includes celebrities like Collins and Delevingne, as well as the Kardashian sisters, who naturally have dark, thick hair due to their Armenian roots. The far-off paparazzi shots of yesteryear could never show off groomed eyebrows as well as a well-lit selfie, and we get to see those all day long.

Bold brows might also be trendy because they contrast strongly with the thin brow trends of the ‘90s—a look that’s now considered outdated. Influenced by celebrities like Pamela Anderson and Gwen Stefani, many women plucked—and over-plucked—their brows until they were pencil-thin.

“The ‘90s did a number on the ladies of my generation. We looked to Drew Barrymore and the cast of Friends as our beauty icons,” says Di Medlock, exhale spa’s national director of waxing.“Many of us tried to force our brows into a thin and highly stylized shape, which is not universally flattering.”

Another reason for the apparent popularity of thick brows? As far as beauty standards go, it’s relatively attainable, says Medlock. “We can’t all be a size two or have legs for days, but brows…that works for everyone,” she says.

And if your brows aren’t currently working for you, they’re relatively easy to fix.

How do I decide between different eyebrow shapes?

When it comes to styling your brows, you want to go bold and trendy while still looking natural. The key to great eyebrows is choosing a good shape.

Unfortunately, there are no universal rules when it comes to shaping your brows. “Brow rules are like horoscopes—they can’t all work for everyone all of the time,” Medlock says. “The human face is too unique for that kind of simplification.” Instead, it’s important to keep certain soft rules and tricks in mind when it comes to choosing an eyebrow shape.

Medlock notes that your different facial features will be accentuated by different brow shapes. “A thinner brow will highlight a dominant feature, whereas a thicker brow will draw attention away,” she says. A thick brow can reduce the look of a large nose, for example, while thinner brows could draw more attention to your eyes. Angled brows can make your features look sharper, while round eyes will emphasize rounder cheeks or lips.

Base your eyebrow shape on the shape of your face, but remember it isn’t the only thing you need to consider. Sabah Feroz, blinkbrowbar brow specialist, says that your ideal brow shape also depends on your brow bone structure and other facial features. Not every round-faced person, for example, would look great with the exact same shape of eyebrows.

Stick to these soft rules, but take your own brow bone into account, too.

Round faces are nearly as wide as they are long. If your face is round, it’s widest at the cheeks with a soft jawline.

If you have a round face, avoid rounded brows and go for angled brows with high arches, instead. If a high arch is too bold for you, soften it a little. According to Feroz, this will open up your eyes and balance your facial features, making your face look slimmer.

Oval and oblong faces are relatively round, but a bit longer than truly round faces. They’re widest at the cheekbones and involve a soft jawline.

Generally, any eyebrow shape will suit you if you if you have an oval or oblong face. If your bone structure seems a bit sharp, a low arch can soften your look. Opt for a nearly-flat brow—that is, one with a very low angle—if your face is particularly long.

Square- and rectangular-shaped faces are equally wide at the forehead, cheekbones and jawline. They often include a prominent jawline.

If you have a square or rectangular face, the angles of your jaw might look a bit harsh if paired with a dramatically-arched brow. Soften your look by choosing a round or soft arched brow instead. The curves will accentuate your rounder features like your eyes and lips.

Your face is heart shaped if it’s widest at the forehead and narrowest at the jawline. You might have a sharp chin, too, and will want to soften your eyebrows to counteract that sharpness.

At the same time, you don’t want your face to look too round, especially if it’s short. Opt for a soft, low arch with a rounded curve to keep your face looking balanced.

Diamond-shaped faces are widest at the temples. They often look a bit angular and bony, and can include a sharp chin.

A high arch will bring attention to your eyes whereas a soft arch will soften your features, meaning either shape is a good option depending on the look you’re going for.

How should I sculpt my eyebrows?

The shape of your eyebrows is important—but how you shape them is also important. If you don’t sculpt your eyebrows correctly, you might over-pluck, irritate your skin, and cause yourself a lot of unnecessary pain.

When it comes to removing unwanted growth and keeping what’s left behind “neat,” you have several options. Waxing and threading are both popular ways to shape your brows quickly. Although both methods can be painful, they’re a lot quicker than tweezing individual hairs.

“If you’re looking to maintain your brows at home … only remove the stray hairs,” Feroz advises. “Don’t attempt to shape unless you know what you are doing.” She suggests you leave shaping to the professionals and commit to maintaining brow tidiness between scheduled sculpting appointments.

It’s a good idea to shower or wash your face with warm water just before you work on your brows. The warm water will open your pores, making it easier and less painful to remove the hairs. Medlock suggests you brush your eyebrows downward before plucking above your brow to help you see the stray hairs. Use a pair of tweezers with a slanted tip in order to get the best hold.

Be careful not to over-pluck your eyebrows, as this will damage your follicles. You can avoid over-plucking by leaving a fair amount of time between each tweezing sesh. If you have over-plucked, give your eyebrows time to regrow. In that time, don’t pencil over or dye your brows too much, as that can further irritate your skin.

Tummala recommends eyebrow threading instead of waxing or tweezing. Threading is a centuries-old technique that was initially popular in the Middle East, India, and China. Many people find it more effective, quicker, and less painful than other forms of hair removal. Those who swear by threading also say that the hairs grow back slower than they would if they were waxed or tweezed.

“The skin around your eyes is super delicate and waxing your brows essentially takes that first layer of skin off. Ouch!” Tummala says. “We always recommend threading your brows since threading is more precise and allows you get the shortest hairs from the root.”

Of course, if you have particularly sensitive skin, hair removal of any kind might irritate it. If you’re maintaining your brows at home, keep some soothing cream on hand. If you’ve accidentally ripped some skin off, a cold compress and some fresh air should help you soothe it.

Beyond Taming: How to Enhance Brows Without Going Overboard

Of course, since the trend is all about thick, bold brows, you don’t just want to remove stray hairs: you want to enhance the shape of your eyebrows, and many people rely oneyebrow pencils, powders, and creams to make their brows look fuller and thicker.

If you’re reaching for a pencil to achieve thicker-looking brows, you might want to use an eyebrow stencil to help you create and fill in the shape. If you don’t have a stencil, Medlock gives this advice: “Make a solid line on the underside of your brow and then use upperward feather strokes to fill sparse areas.”

She goes on to say, “I never take the pencil all the way to the top edge of the brow—it looks too artificial.” She suggests brushing over harsh pencil lines with a clean mascara wand to give your brows a softer, more natural look.

If your brow hairs are particularly light, you can have them tinted. Salons offer tinting services, and it’s also relatively easy to do at home with a home tinting kit. Just don’t make your eyebrows too dark—start by going a shade or two darker than your natural brow color.

For those who have particularly sparse eyebrows, microblading might be the answer. Microblading is a meticulous process that involves tattooing hair-like strokes over your brow area. Unlike traditional eyebrow tattooing, though, microblading involves using tiny needles to deposit small amounts of ink under the skin. The result? Smaller, feather-like strokes that create natural-looking brows.

Microblading is semi-permanent, but some specialists recommend a follow-up appointment after a month to retouch the initial work. After that, the effect should last between one and three years. Microblading is usually priced between $600 and $900—and while this may seem pricey, it could be worth it if you find yourself filling your brows in every day and wanting to invest your time elsewhere.

We can’t all be Cara Delevingne, but we can take inspiration from her look and embrace thick, bold brows—that is, until the next eyebrow trend catches on.