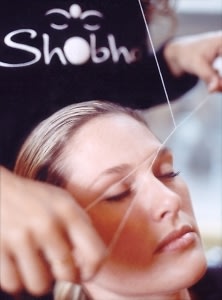 Photo Credit: Guest of a Guest

Fear not hairy, busy Washingtonians! Soon, you’ll be able to get your eye brows threaded, bikini lines waxed and still have time to grab a power lunch at Cafe Milano. The NYC salon, which already has a huge following, is making the move to the Capital later this month. In an interview with Washingtonian Magazine, owner Shobha Tummala differentiates her salon from other by their belief in perfection–from the quality of their treatments to the cleanliness of their salons.

– Threading: considered to be less painful than waxing (score!) this technique pulls hair out of the skin by the root all while leaving minimal redness.

– Sugaring: this form of hair removal resembles waxing but is gentler on the skin. The formula comes from Shobha’s own secret recipe that uses only sugar, lemon juice, water and glycerin.

– Waxing: those of us who like doing things the traditional way should try the Shobha Waxing Treatment. The wax contains Azulene oil which is a natural anti-inflammatory derived from chamomile plants.

– Trimming: takes care of body hair without removing it from the root. Get a tidy appearance without looking completely hairless (this is a perfect way to clean up your man before he meets the parents).

Before you take your boat out on the Potomac or head to the beach don’t forget to stop by Shobha, which will be located at 1730 M Street NW (next to The Huxley).