I’ve been getting bikini waxes since I was 16 years old. My first wax was probably my most expensive one—my best friend and I picked the fanciest waxing center in San Antonio, for fear that a crappy waxing facility would lead to a painful first experience. After lying to our mothers about where we were headed (shopping at the mall, Mom!), we drove about 25 minutes out of town to a fancy spa on the outskirts of San Antonio. Choosing a spa located in our little town was out of the question—what if a fellow Alamo Heights mom spotted us waxing our nether-regions?

That was about 11 years ago, and all I remember are spa-like candles everywhere, some sort of stirrup situation, and panicking that my mom was going to call me during my treatment. Since then, I’ve gotten close to 50 bikini and Brazilians waxes, enduring the pain through each and every one of them. I stopped getting regular bikini waxes a few months ago, though, when I began getting laser hair removal treatments.

I was lucky enough to try multiple laser treatments at Shobha Hair Removal Salon, an NYC hotspot known for their brow-threading and quick hair removal services. I was asked to avoid getting a wax four weeks before my appointment, and to shave “down there” as close to the skin as possible the night before. I explained to my technician, Shashi, that since I’d gotten almost 50 waxes in the past, that my pain tolerance was high, and that the laser treatment should be a breeze for me.

Boy, was I wrong!

The treatment hurt—I’m not gonna lie. Since the laser zaps each hair follicle, it was a more targeted pain than the waxes I’d previously received. The esthetician rips out a large area of hair in one swoop when waxing, rather than each hair one-by-one, which is how lasering felt. Thankfully I have dark, thick hair, which makes it easier for the laser to pick up the melanin (or color) in my hair and target the follicle at the root, causing a stunt to the hair follicles’ growth. The laser tends to perform better for those with darker hair and lighter skin because the melanin is more prominent.

The treatment took about 15 minutes, and I was sweating up a storm the whole time. Thankfully, Shashi coached me through the whole process, assuring me that it would all be worth it, and that we were almost done. She let me take a few breaks, and used the cooling device attached to the laser to ease the pain.

Although the smell of burnt hair probably would have deterred most people away from round two, I decided to go back again eight weeks later and continue with the process (I told you I was tough!). My second treatment was basically pain-free and took about half the time as the first, and I’m so glad I went back. I still have a few more treatments to go, but I’m already noticing thinner, sparser hair that takes longer to grow back and is much less noticeable. 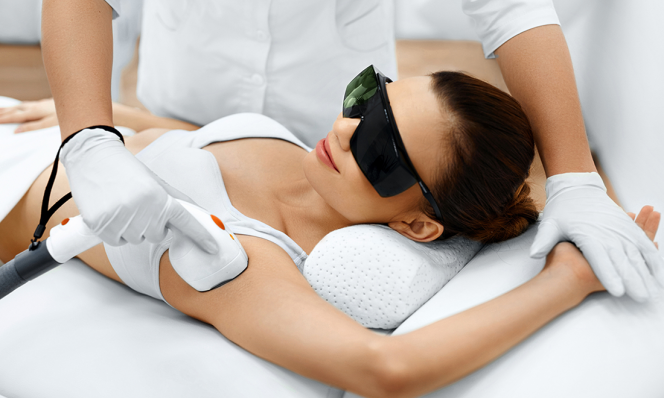 After my successful treatments at Shobha, I went to get my underarms lasered at LaserAway in NYC. Lasering my underarms was a walk in the park compared to the bikini area, and I’ve only had to shave them once a week since getting the treatment. I shave my legs every day (I know, I’m crazy!), and I plan on getting my legs lasered next. I’m in love with the laser, and I’d recommend it to anyone who’s tired of shaving every day or going broke from regularly waxing.