Byrdie | Sugaring vs. Waxing: Everything You Need to Know 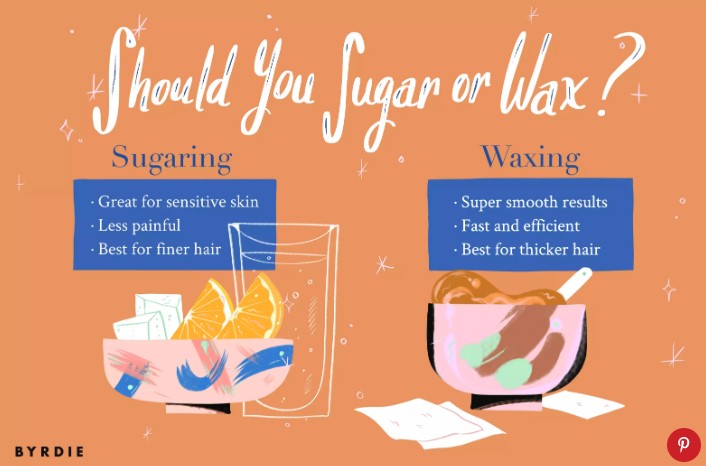 It’s impossible to keep up with the hair removal world when a new device is popping up every other day. However, waxing and sugaring are hair removal techniques that have been around since the beginning of time. Research says that hair removal is increasingly the norm in Australia, the United States, and the United Kingdom but has been documented as early as ancient Egypt.

Waxing and sugaring are often grouped together because both techniques lift hair from the root of the hair follicle and have a longer effect on the skin than shaving. But truth be told, they’re two very different techniques. With waxing, sometimes a strip is used to remove your hair in the opposite direction of your follicle’s growth pattern. The opposite happens with sugaring, where the hair is pulled in the natural direction of your follicle’s growth pattern. Wax also tends to be hotter than sugaring, which is normally room temperature.

To get the lowdown, we tapped Shobha Tummala, founder and CEO of Shobha hair removal and laser spa, and Enrique Ramirez, wax expert, esthetician, and founder of Face to Face spa based in NYC.

Shobha Tummala is the founder and CEO of Shobha, a full-service hair removal salon in New York, NY. With over 18 years of experience, Shobha has brought the beauty traditions of her home country India to her extensive list of clientele.

Enrique Ramirez is a wax expert, esthetician, and the founder of Face to Face spa in New York, NY. His nearly fifteen years in the industry have brought clients such as Ellen, Alanis Morisette, and Lindsay Lohan.

“Sugaring is an organic way of removing hair using a sugar paste mixed with lemon juice and sugar,” says Ramirez.

“Sugaring is a form of hair removal that resembles waxing but is gentler on the skin and is all-natural (only sugar, lemon juice, water, and glycerin),” explains Tummala. “It dates back to the civilizations of ancient Mesopotamia, Egypt, and Greece. Sugaring tends to hurt less than waxing because it pulls less on the skin while still effectively removing the hair. This also means that you will have a lot less irritation and redness. In addition, the weight of the denim cloth used in our salon for the sugaring gel helps reduce some of the pain.” While the recipe cited above is the standard recipe, some technicians may put essential oils or honey in their sugars too.

“At our spa, waxing is aromatherapy-based,” explains Ramirez. “It’s gentle with a composition of essential oils that makes waxing less irritating and close to painless.”

“Waxing is a tried-and-true method for getting rid of unwanted body hair,” Tummala elaborates. “Some benefits of waxing are super-smooth results—it effectively removes hair from the root. Our formula contains azulene oil, a natural anti-inflammatory derived from the chamomile plant, to soothe the skin during the treatment. Waxing is also fast and efficient, meaning large areas can be waxed at once.”

“Sugaring is an organic paste made for those who prefer organic, natural, and gluten-free approaches to life,” says Enrique. “The waxing offered at Face to Face is close to organic with a touch of aromatherapy from scents of lavender, rosemary, and chamomile. The level of pain depends on the pain threshold of the individual—no hair removal is left unnoticed or not felt unless you’re unconscious. Some tolerate either technique well, and others can’t even look at sugaring without breaking out. Results really depend on each individual and their specific skin type. In terms of technique, sugaring paste is molded onto the skin using a gloved hand then removed, while wax can be used with a strip or alone.” Sugaring is also able to remove shorter hair—it only has to be 1/16th of an inch—than waxing can, as to get waxed your hair has to be at least a half inch.

“Sugaring is all-natural, which is great for folks who may have allergies to certain ingredients or just want only natural ingredients on their body,” explains Tummala. “Sugaring is also a lot less sticky than wax, so usually the redness and irritation that a lot of people see with wax will not be seen with sugaring. In sugaring, the sugaring gel is sticky enough to adhere to the hair but not so sticky that it is lifting your skin, so a lot of folks find sugaring to be a lot less painful.” You’re also able to wash the sugar off with water, whereas wax has to be washed off with a special cleanser that could also potentially contain allergens.

Consider Your Skin Type When Deciding on Sugaring vs. Waxing

According to Ramirez, each technique depends on the body area, hair thickness, and length. For fine hair, he suggests sugaring, and for thicker hair, he recommends waxing. “Clients tend to comment that smoother results last longer with sugaring than waxing,” he says. “I personally prefer sugaring, as results last longer and it’s less redness left afterward.” If any part of your body is particularly heat-sensitive, stick with sugaring, which is done at room temperature. Wax has to be at least somewhat hot to work.

“Sugaring is definitely better for sensitive skin, as it is all-natural and attaches more to the hair and less to the skin, making it less painful,” Tummala reiterates. “It’s the most gentle and natural option for the skin.” She also notes how it’s important to consider different methods for different body parts. “If people tend to break out or have adverse reactions to waxing, sugaring would also be a better option. I also have more sensitive parts of my body that I sugar, like my bikini area and my arms.

For legs, I wax, as it tends to be a faster process because when you sugar, you might have to go over an area two times because it is less sticky.”

There you have it. If you’ve found that your skin feels aggravated after waxing, you may want to give sugaring a try, which is better for sensitive skin. Either way, both techniques remove hair for an extended amount of time.