Allure | Eyebrow Threading 101: Everything You Need to Know About This Brow-Shaping Technique

Whether you’re used to a more maintained brow look or are in need of some extra TLC in the arch department, eyebrow threading is an excellent, natural option for hair removal. With its origins in Asia centuries ago, eyebrow threading is a simple process that is often considered to be one of the most painless (and least invasive) options for shaping brows. But if you’ve ever seen it in action and have wondered how a single piece of thread (held in the practitioner’s mouth) can transform arches in mere minutes, allow us to explain.

What Exactly Is Brow Threading?

The threading process is quite simple and typically involves a single piece of cotton thread, according to Shobha Tummala, the founder of Shobha hair-removal salon. After wiping the eyebrow area clean with alcohol, the thread is “twisted and pulled along areas of unwanted hair acting like a mini-lasso, lifting the hair directly from the root without the use of any chemicals or unnecessary tugging on delicate skin,” she explains.

One of the most common methods of threading is with the long strand of cotton thread — held in one end of the mouth, says Nitasha Dahiya, owner of Dupont Threading in Washington, D.C. “The thread is twisted in order to efficiently roll over the skin to individually pluck the roots of unwanted hair,” she says. While there are many different threading methods, Dahiya says this is the most practiced technique.

Other methods include either the use of a chain instead of the mouth to hold the thread, or the “butterfly method,” which has the knotted thread being twisted and pulled through two fingers on each hand, says Dahiya. Clients are typically in a reclining chair and asked to hold the skin taut around the brow, which makes the area more accessible and often alleviates the discomfort, too.

The Benefits of Brow Threading

As opposed to waxing, tweezing, or lasers, threading is considered one of the safest and most precise methods of hair removal, especially in the delicate areas surrounding the eye. “Threading allows our specialists to have greater control over which hairs are removed,” says Tummala. The technique is also “100 percent natural,” which means there are no artificial waxes, chemicals, or invasive techniques used during the procedure.

Even dermatologists are on board with the brow-shaping technique. Shari Marchbein, a dermatologist and clinical assistant professor of dermatology at New York University School of Medicine in New York City, considers threading to be one of the safest options as she’s witnessed burns from waxing, particularly in patients who use retinoids for acne or have sensitive skin.

Other methods include either the use of a chain instead of the mouth to hold the thread, or the “butterfly method,” which has the knotted thread being twisted and pulled through two fingers on each hand, says Dahiya. Clients are typically in a reclining chair and asked to hold the skin taut around the brow, which makes the area more accessible and often alleviates the discomfort, too. 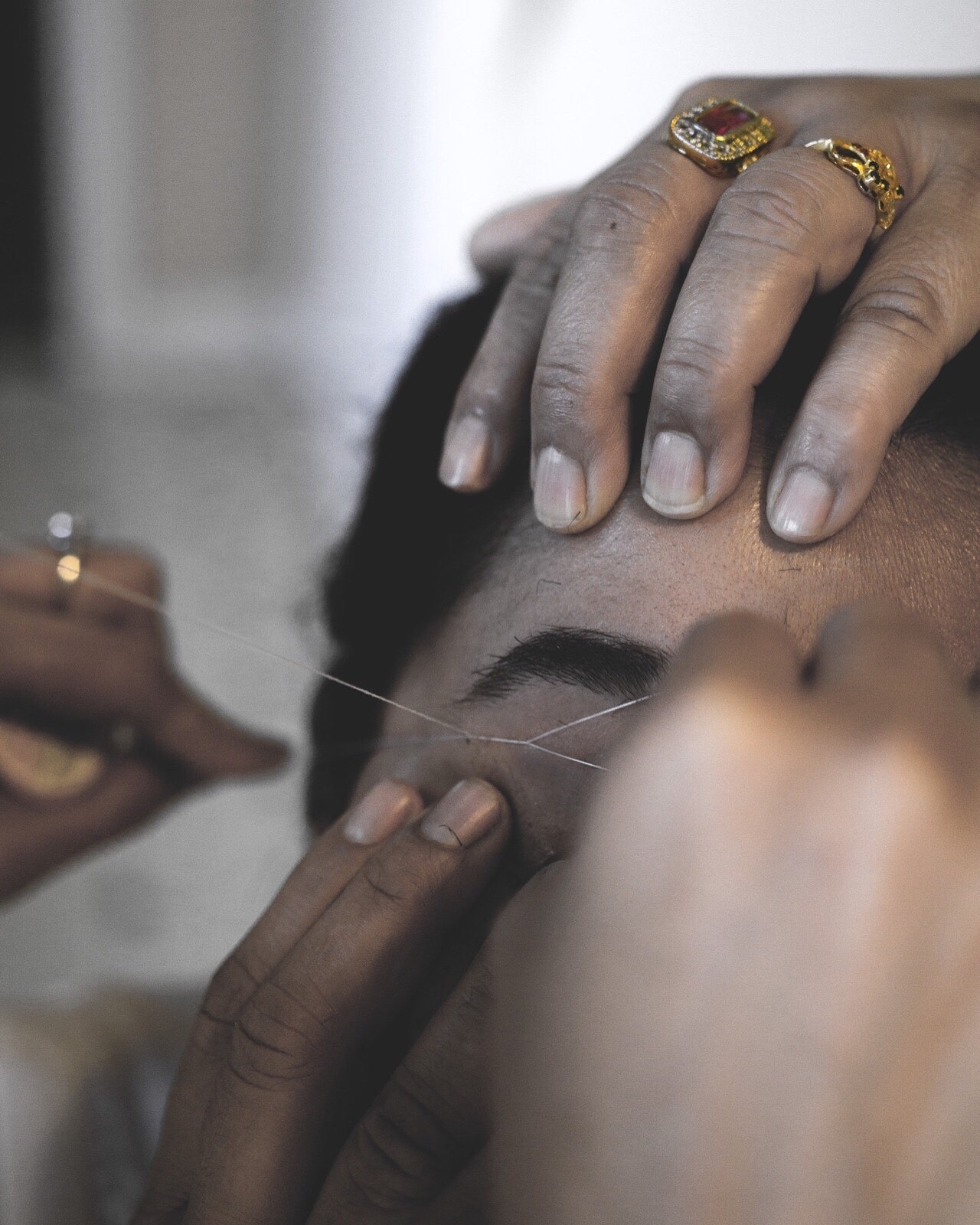 Eyebrow threading is also said to be safer for those prone to post-waxing breakouts, says Dahiya. “Unlike tweezing, threading does not create ingrown hairs and is safer for all skin types,” she says. “A good practitioner has light and painless movements with the thread and skin.”

Although threading does involve a piece of thread held in the practitioner’s mouth, Marchbein says the risk of contamination is little to none because “the part of the thread making contact with the threader’s mouth is not the same part as that making contact with the skin.” However, we should note that while rare, contamination can happen (Khloé Kardashian’s fear), but with proper prep and aftercare, it can be avoided.

While it is considered a safe and non-invasive brow-shaping procedure for most, unfortunately, that doesn’t mean the technique doesn’t come with its own set of risks, says Tummala. She warns against brow threading for those who have recently undergone an in-office procedure.

“The only instance where we would recommend you not to get your brows threaded is if you just had a cosmetic surgery,” she says. “We recommend checking with your physician first, and then come back to us three to four weeks after the surgery for your threading appointment, so your skin has had some time to heal.” 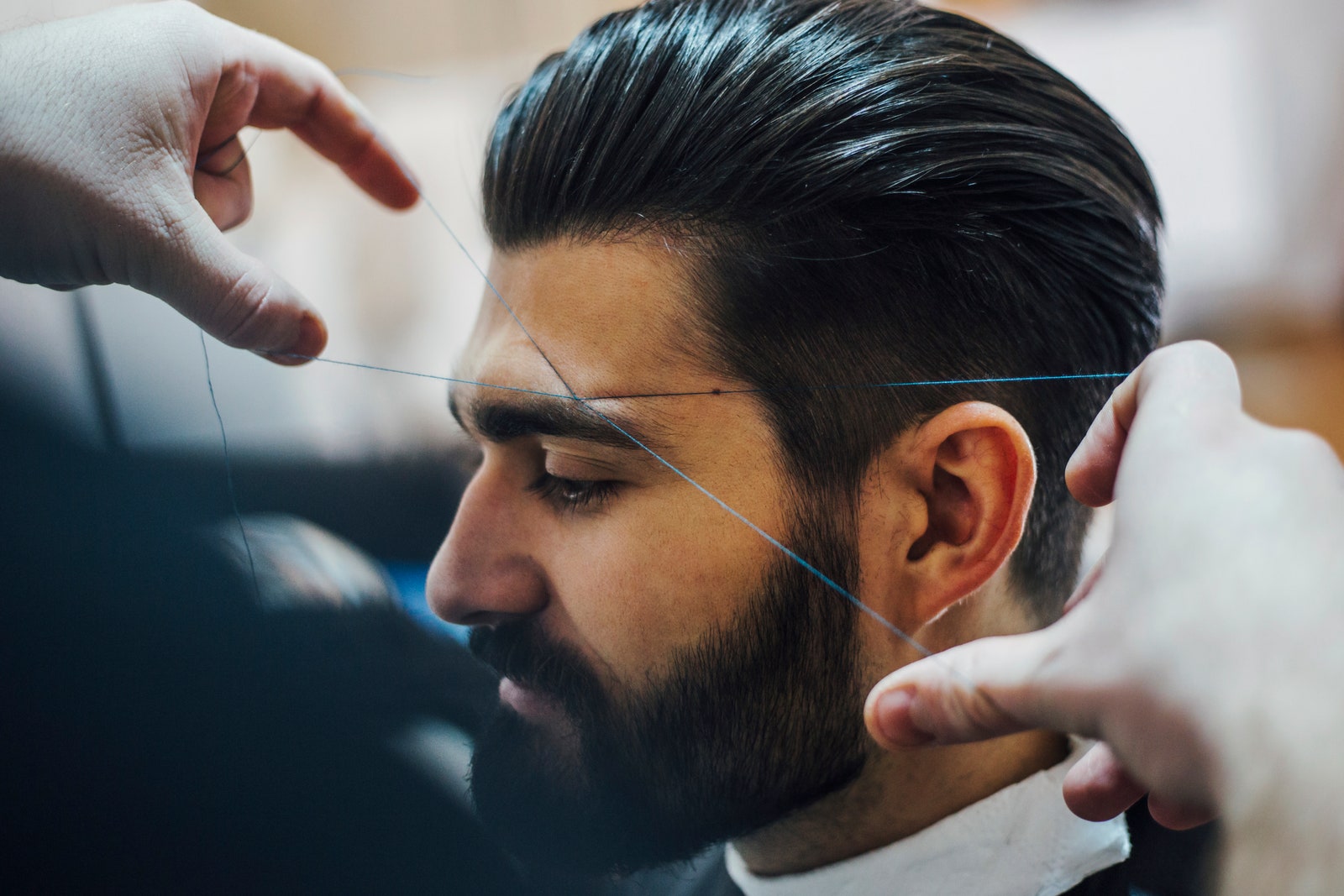 How Often Should You Thread?

While the rate of regrowth is individual, typically threading clients tend to get their eyebrows threaded every two to three weeks, says Dahiya. Because the process actually removes singular hairs from their roots, the results can last just as long as waxing.

How to Find the Right Threader

Just like your relationship with your dermatologist, hairstylist, and even your dentist, finding someone you trust — especially with your brows — is important. Before your appointment, be sure to have an open conversation with your threader to discuss your desired brow shape. But, most importantly, try to relax — your brows are in good hands.

How Much Does It Cost?

While the cost will vary depending on the region, practitioner, and individual needs, Tummala says pricing typically ranges from $12 to $40 for the eyebrow area.