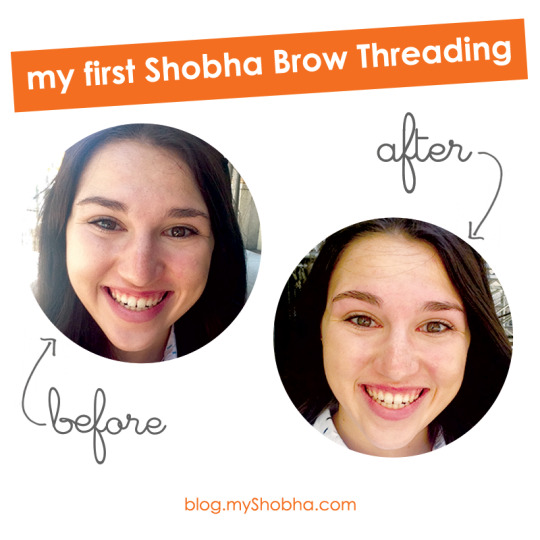 Greetings from the Shobha office in NYC! My name is Lucy, & I’m a high school intern currently working with the Shobha marketing department. If you’ve ever passed our Shobha street team & seen the gawky brunette by the spin-to-win wheel, that’s me!

As a rising senior, my life has been pretty stressful lately. Between SAT prep, AP exams, & tennis team practices, I barely had time for a decent amount of sleep, much less a social life. So when summer finally rolled around, I tried to find the best way to return my heart rate to normal after months of hypertension. My solution was a corporate internship in the big city. I guess I was having stress withdrawal or something. Although I was initially terrified to leave my south Florida suburb for my first office job, my fears couldn’t have been more misplaced. The Shobha community is extremely welcoming, & every team member truly cares about providing the best products & services available to clients. The one problem? I had yet to try threading, one of Shobha’s core services. That had to be fixed immediately.

My brow care routine is usually minimal to nonexistent. I’ve gotten my brows waxed approximately every month for the past few years, & that was only for cleaning up that pesky unibrow & those unwanted strays. “Just a little bit off the top & bottom please” became my mantra as I repeated it to specialists across my hometown. Other than the occasional tweeze in between waxing sessions, I pretty much let my brows do their thing. Pencilling in my brows has always felt unnecessary since I have naturally thick brows, & I’ve never really liked the way it looked on me. Not what you’d expect from a Shobha intern, right?

I continued my endless cycle of wax, tweeze, & repeat despite my dissatisfaction with the waxing process. Waxing hurt, & I always had to schedule my appointments after school because the redness & irritation would last for hours. Even when the redness faded, I was sometimes left with scabs from the thin layer of skin that was removed along with my unwanted unibrow. A quick dab of concealer could cover my acne or dark undereye circles, but the scabs were a different story, & I tried my best during class to ignore the fact that it felt like a spotlight was shining on my brows.

Obviously I needed a change, but I was reluctant to stray from my routine for a few reasons. The first is one, I’m sure all of us have experienced: laziness. I’m fortunate enough to have a waxing salon only a two minute drive from my house, so I never felt the urgent need to search for an alternative. I could leave my house, get my brows done, & be back in bed watching Netflix within 20 minutes. That sounded like a pretty sweet deal to me. Also, I never looked for an alternative to waxing because I’m a huge scaredy cat. I freely admit that I am terrified of everything, especially pain. Stubbing my toe makes tears well up in my eyes. Miniscule paper cuts have me making a mad dash for the band-aids & neosporin. I had heard horror stories about threading, that it was like a million little tweezers plucking your brows at once, & I was immediately turned off.

All of my hesitations came to the forefront of my mind as I entered Shobha Financial District last week. I had been a few times before on errands for the office, but entering as a client was a much different experience. Immediately the front desk staff put my fears at ease. I was checked in quickly & efficiently, & my Shobha specialist was ready for me before I even had a chance to sit down in the lounge area. As I walked over to the chair, my worries began to resurface. There was no backing out now, so I decided to just lean back, close my eyes, & let my Shobha specialist do her job, but as soon as my eyelids began to droop I felt her tap my shoulder, & my favorite part of my appointment began. For about two minutes my Shobha specialist & I discussed exactly how I wanted my brows to look. My typical “Just a little bit off the top & bottom please,” was shockingly met with “How much?” & “Where exactly?” & “Do you think this would look good?” These questions had never even crossed my mind before. My brows had always been at the mercy of my esthetician, & at that moment I realized just how wrong that was.

After that revelation, the threading itself was a breeze. The rumors from my friends were completely unfounded. I can’t promise your experience will be pain-free, but my experience was as painless as it can get when hairs are being ripped out by their follicles. I can’t describe the feeling exactly, but the closest analogy I can make is that it feels like trimming your eyebrow hairs – only a little more pinchy. The service itself took under five minutes, the skin around my brows was soothed with Shobha Rosewater Calming Gel & a Shobha Rosewater Freshening Cloth (both all natural with a heavenly scent), & then I was out the door. Now my only concern was the redness that plagued me after waxing sessions, but to my surprise it had faded by the time I made it back to the office a half hour later. On top of all that, my brows looked better than ever!

Now that I’ve experienced threading, I can proudly proclaim that my waxing days are over for good. I realize that the irritation & scabs are not worth the mediocre results of waxing. In fact, as soon as I left the salon I got my mom on the phone to gush about the experience & book her an appointment for when she comes to visit this week. Hopefully a location will open in South Florida at some point (pretty please, Shobha?), but until then I’ll spend the rest of my time in the New York office trying to make your Shobha experience as great as mine was.